Hasbro Gaming Trouble: Star Wars The Mandalorian Edition Board Game for Kids Ages 5 and Up 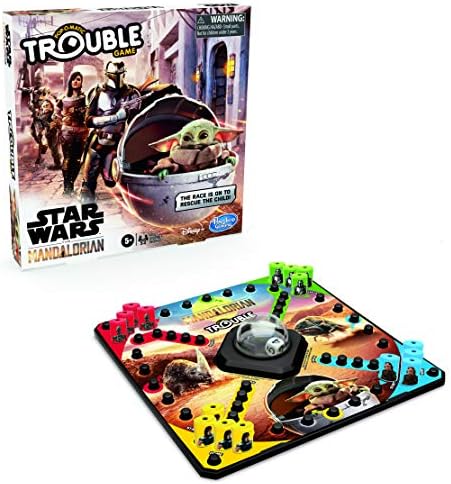 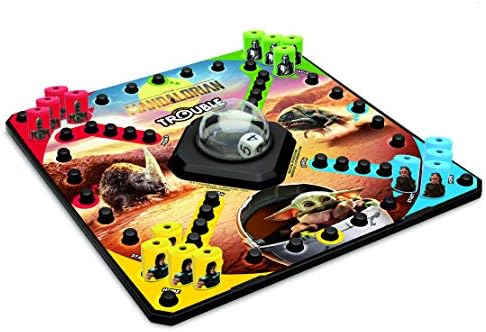 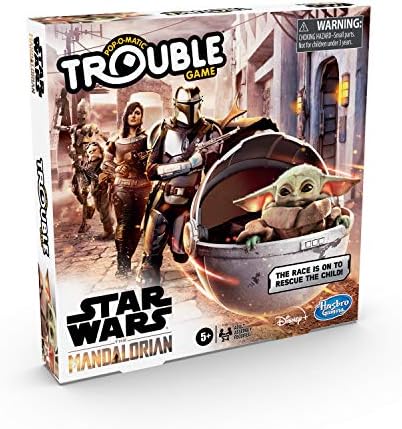 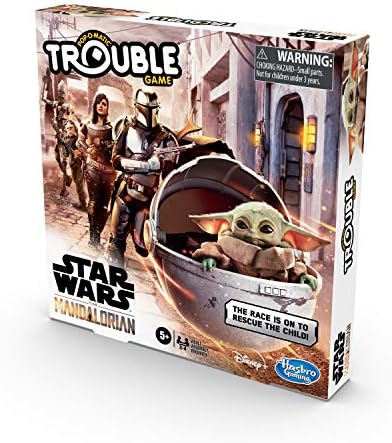 Inspired by the The Mandalorian live-action TV series on Disney Plus, this edition of the Trouble game combines Trouble gameplay with The Mandalorian adventures. Imagine racing around a dangerous planet in the outer reaches of the galaxy to rescue The Child, the adorable character Star Wars fans often refer to as “Baby Yoda.” Choose to play as bounty hunter The Mandalorian, IG-II the droid, the skilled warrior, Cara Dune, or the vapor farmer, Kuill. The first player to get all 4 of their pawns to the Home space to rescue The Child wins This Trouble game makes a fun choice for Family Game Night and it’s a great gift for Star Wars The Mandalorian fans, ages 5 and up.
IMAGINE RESCUING THE CHILD: Pop the Pop-O-Matic die roller and move the character pawns around the board. The race is on to rescue The Child — the character often called “Baby Yoda”
INSPIRED BY THE SERIES: This edition of the Trouble board game is inspired by the The Mandalorian live-action TV series on Disney Plus
THE MANDALORIAN CHARACTER PAWNS: Race around a dangerous planet on the game board with The Mandalorian character pawns. Play as The Mandalorian, Cara Dune, IG-11, or Kuiil
POP THE DIE: Depending on the number shown on the die, players might be blocked by an angry mudhorn, fight off mercenaries, or receive a handsome reward
FOR STAR WARS FANS: With this Trouble Game: Star Wars The Mandalorian edition, Star Wars fans can imagine favorite scenes and moments from a galaxy far, far away

There are no reviews yet.

Be the first to review “Hasbro Gaming Trouble: Star Wars The Mandalorian Edition Board Game for Kids Ages 5 and Up” Cancel reply

Added to wishlistRemoved from wishlist 0
Add to compare

Talking with Your Toddler: 75 Fun Activities and Interactive Games that Teach Your Child to Talk

Hasbro Gaming Trouble: Star Wars The Mandalorian Edition Board Game for Kids Ages 5 and Up

Buy Now
About us

Shopdealsksa.com is a participant in the Amazon Services LLC Associates Program, an affiliate advertising program designed to provide a means for sites to earn advertising fees by advertising and linking to Amazon.com

This website uses cookies to improve your experience while you navigate through the website. Out of these, the cookies that are categorized as necessary are stored on your browser as they are essential for the working of basic functionalities of the website. We also use third-party cookies that help us analyze and understand how you use this website. These cookies will be stored in your browser only with your consent. You also have the option to opt-out of these cookies. But opting out of some of these cookies may affect your browsing experience.
Necessary Always Enabled
Necessary cookies are absolutely essential for the website to function properly. These cookies ensure basic functionalities and security features of the website, anonymously.
Functional
Functional cookies help to perform certain functionalities like sharing the content of the website on social media platforms, collect feedbacks, and other third-party features.
Performance
Performance cookies are used to understand and analyze the key performance indexes of the website which helps in delivering a better user experience for the visitors.
Analytics
Analytical cookies are used to understand how visitors interact with the website. These cookies help provide information on metrics the number of visitors, bounce rate, traffic source, etc.
Advertisement
Advertisement cookies are used to provide visitors with relevant ads and marketing campaigns. These cookies track visitors across websites and collect information to provide customized ads.
Others
Other uncategorized cookies are those that are being analyzed and have not been classified into a category as yet.
SAVE & ACCEPT